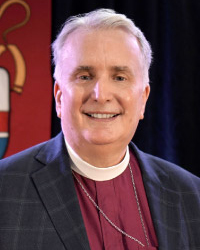 The Bishop of Central Florida is the Chief Pastor of every parish of the Diocese, and maintains Orlando as his See City, with St. Luke’s Cathedral.

The Rev. Gregory O. Brewer, current bishop of Central Florida, was elected at a special diocesan convention Nov. 19, 2011, and has served as bishop since 2012. A full biography may be viewed on the Diocesan website.

Bp. Brewer is slated to retire in July 2023, and the search process for the next Bishop of Central Florida is ongoing. 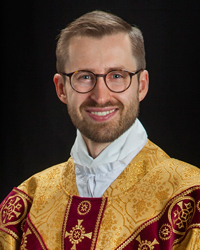 As the Bishop cannot be present at each of his parishes every Sunday, he appoints priests to serve in his absence. The title of Rector (one who rules) is granted to priests installed with tenure in leadership of a parish.

The Rev. Matthew Perreault was born in Calgary, Canada and the son of a Roman Catholic father and Anglican mother, he was raised in the Pentecostal tradition. He first attended St. James Anglican Church in Calgary at the behest of his grandmother, and even at a young age was profoundly moved by the liturgy.

The son of a construction worker, Matthew lost his father at the age of ten, an experience that would shape his younger years. After a period of anger, he would find God and solace in the Anglican liturgical tradition and began attending St. James as an adult while studying for his Bachelor of Arts in International Relations and Public Policy at the University of Calgary in 2003.

He discerned a call to ordination and began graduate studies at Ambrose Seminary in Calgary where he served as the Spiritual Director of the Seminary for a year. He took additional credits from Regent College, and eventually concluded his studies and received his Master of Divinity from Nashotah House Theological Seminary in Nashotah, WI. He was ordained to the Diaconate August 3, 2018, the Feast of St. Stephen the Deacon and Martyr, at Holy Cross Anglican Church in Calgary where he briefly served as Deacon. After receiving his M.Div from Nashotah House in 2019, Matthew was ordained to the Sacred Order of Priests on June 22, 2019, the Feast of St. Alban the first Martyr of Britain, at the Cathedral Church of the Redeemer in Calgary by Archbishop Gregory Kerr-Wilson. He was assigned to serve as curate at All Saints Anglican Church in Cochrane where he served from 2019 to 2021 before accepting the call to become the XIII Rector of St. Thomas in September of 2021.

Matthew is married to Lindsay “Linzie” Perreault and has family in Canada and in-laws in Ohio. He enjoys tea, marmalade, hiking, camping, cooking, baking, board and card games, and reading.

Since moving to Central Florida, Matthew has rediscovered the joy of God’s gift of air conditioning. 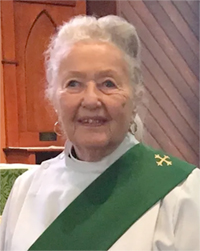 In the Acts of the Apostles, deacons are ordained to assist the Apostles. Today their Order exists to proclaim the gospel and caring for those in need, a role formalized in the liturgy through the reading of the Gospel and leading the Prayers of the People.

The Rev. Janet V. Clarke was born in Manhattan, NY in 1931 and raised attending the local Lutheran church until age 11 when her family transferred to The Episcopal Church. She was confirmed at age 12, and profoundly influenced by her experience of First Communion that year.

Janet attended Drakes Business School and pursued a business career that began in New Jersey and concluded in Miami, FL. After discerning a call to the Diaconate, Janet began studying at the necessary institutions, primarily the Diocesan School for Ministry in the Diocese of SE Florida.

Janet was ordained to the Diaconate on June 4, 1988 and assigned to serve at St. Andrew’s Episcopal Church in Miami as Deacon and on staff as Director of Christian Education for Children and Adults. While in The Diocese of SE Florida, she served on the Commission on Ministry, Commission on Christian Education, and the Search Committee to elect a Suffragan Bishop. In 1996, she moved to Leesburg, FL and began serving at St. Thomas where she has been ever since.

Janet is the widow of Ronald “Chuck” Clarke. She has 4 married children, 9 grandchildren, two step-children, one step grandson, and one step-great grandchild. She enjoys reading, knitting, sewing, and cooking. Her earlier interests included sailing, flying, water-skiing, and diving. Janet believes her travels have given her a fuller appreciation of the diversity of creation that exists under our one creator.